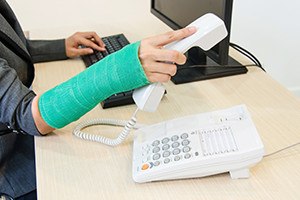 Most often, workers' compensation benefits are associated with jobs involving manual labor, such as construction. However, injuries can occur on the job in any profession. Even office workers may sustain injuries on the job. For example, secretaries and receptionists may suffer injuries due to improper ergonomics. A computer that is too high can cause eyestrain, while poor posture can cause back, neck, and hip pain or other musculoskeletal strain. It can be important for secretaries and receptionists to get up and move around or switch tasks. A keyboard that is not properly positioned in relationship to a worker's body may eventually result in carpal tunnel syndrome. If you are a secretary or receptionist who has suffered an on-the-job injury, you should consult the experienced Boston workers’ compensation lawyers at Pulgini & Norton about the possibility of recovering benefits.

If you are a secretary or receptionist who was hurt on the job, you probably are entitled to workers' compensation benefits. You will need to inform your employer of the job-related injury. The employer notifies the Department of Industrial Accidents (DIA) and the insurer. The insurer must make a decision about whether to accept or deny your claim. Sometimes an insurer starts paying benefits right away, but this is not an admission of liability. Insurers have a 180-day period known as the "pay without prejudice period," during which payments are not admissions of liability.

In other cases, an insurer denies a worker’s claim. Although the workers' compensation system was put in place to make it easier for workers to collect benefits than it would be if they had to fight for compensation through civil litigation against their employers, many valid claims are denied. In some cases, this is simply because an employer has failed to give the appropriate information. Sometimes employees have trouble getting benefits after an office injury like carpal tunnel syndrome because the insurer denies that this injury is work-related. The reason for an insurer's denial must be stated on its Notification of Denial (Form 104).

The Form 104 can advise you on how to appeal the denial. You will need to contest the denial at the DIA. The process of contesting it consists of four stages: conciliation, conference, hearing, and reviewing board. These stages and the remedies they provide need to be exhausted before you can move on to the civil judicial system. If the reviewing board makes a decision with which you or the insurer disagrees, you can ask the Court of Appeals to review it. Some workers' compensation claimants assume that they can represent themselves through the claims process and then retain an attorney only if they need to do so for appellate court review. However, a great deal of deference is given to what happens at the DIA, and in many cases, an administrative judge's decision stands. As a secretary or receptionist debilitated by an office injury, you should retain experienced representation from start to finish of the claims process.

An experienced attorney will represent your employer’s insurer. You should be diligently and vigorously represented as well. Our Boston workers' compensation attorneys represent secretaries, receptionists, and other employees who suffer repetitive stress or other office injuries. We represent people in Somerville, Quincy, New Bedford, and other Massachusetts cities as well. Call us at 781-843-2200 or contact us via our online form to set up a free consultation with a workplace accident attorney.